This ended up being an Easter post by mistake. Still works though. 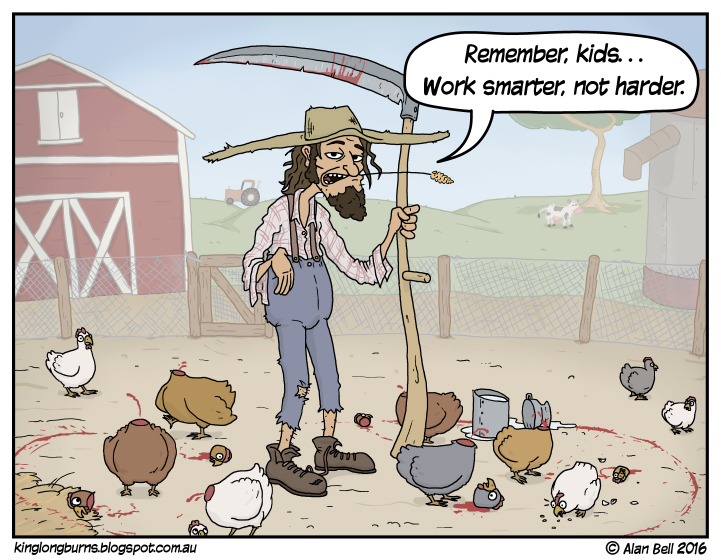 I didn't originally intend for this to be posted at Easter. That's just when it happened to be done by.
Still, I'm sure that there was some egg laying going on at this farm that day.
Most of it shock induced, I think.
Happy Easter, everyone!

In other news, I will be appearing at Supernova in Melbourne soon on the 16th and 17th of April as an actual exhibitor.
I'll have a table, and prints to buy, and I'll also be doing drawings on request so feel free to test my skills with an odd request.
Like maybe a scythe-wielding farmer harvesting chickens like wheat.
Wait, I already did that one. Pick something else.

It will be a first for me as I've never done this kind of official-type appearance before.
Come and share in this historic occasion.
I'll post more details once I know them.

Oh hai!
So, has anyone seen the movie Cat People?
No, not the 1982 movie of the same name that I've only just found out about now.
I mean the 1942 movie about a woman who turns into a panther.

That movie is not too bad.
It also features exactly zero on-screen transformations of person to cat, or vice versa, due to the complete inability of 1942 film-makers to depict that on screen.
No CG for them.
At best they could have actors pretend to be horrified at what they are witnessing, but the audience isn't.

Has anyone seen the sequel; The Curse of the Cat People?
That movie, despite the title, features exactly zero cat people at all.
It's basically about a girl, daughter of some of the characters from the first film, who makes friends with the ghost of the cat person from the first film, and no-one turns into a cat.

Can't say that that was a great idea for a film to be honest.
I don't know quite what they were thinking.
They should have called it Boring Ghost Who Refuses to be a Cat, or Even Interesting At All.