The Icy Breath of Death.

I was sick again this last week, so I wasn't able to get a comic out.
I'm back now though, so don't worry, comics are in production again.
Or do worry. You can react to my comics however you like.

P.S. The weather around here has been bouncing between too hot and too cold on an almost daily basis for weeks now, even more than it usually does. As a result I will no doubt catch every cold in existence.
I will also be developing some new ones of my own!
Look for them in stores this Christmas.
Posted by King Longburns at 14:56:00

The immune system: Best of friends. Worst of enemies. 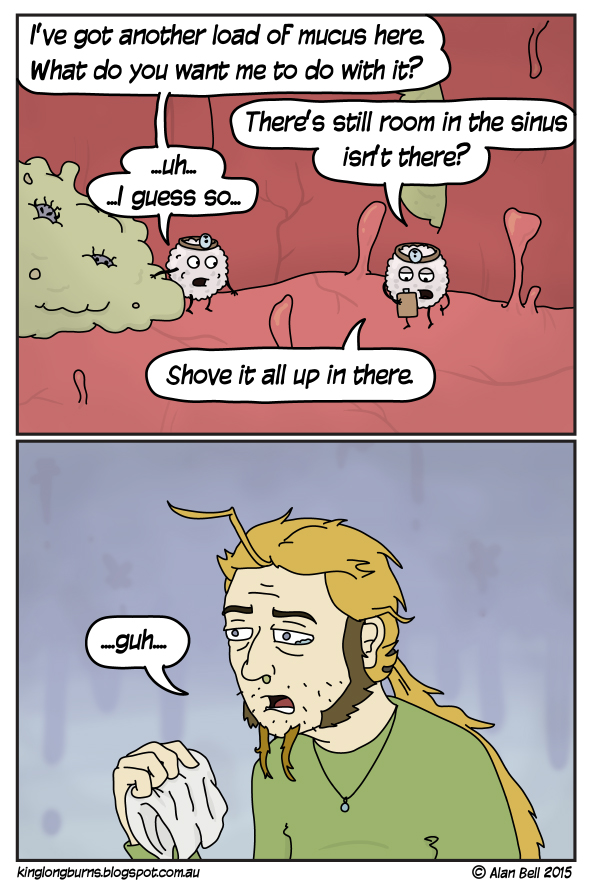 What's this?
Another comic? Less than a week after the last one?
What sorcery is this?

Well, I was a bit late with the last one, so I'm trying to catch up.
Also, this one was already half done, and had been sitting around unfinished for more than a year.
I cheated, basically.
If anyone asks though, definitely tell them that is was some manner of sorcery.

This week's comic is relevant, too, as I was sick recently. That's why the last comic was late.
I'm fine now though.
Thanks for asking. That's very nice of you.

And a good time was had by all.

So PAX was fun this year.
I saw a lot of cool things... I think.
It can be a bit hard to tell, mainly because I spent a lot of time staggering around blinking at all of the coloured lights.
There's a lot of sensory overload going on there.

I was, as usual, completely unprepared for the experience.
I did manage to make it to the talks that I wanted to, and that's one of the main things for me.
I even managed to accidentally see at least one talk that I hadn't planned on by queuing up too early.
It turned out well. Would recommend.

The highlight of PAX was, of course, the invention of Bat-Porn.
#vesperotica

I have filled today's comic with cos-players wearing obscure and out-dated character costumes.
See how many you can find!

I also included someone dressed as Mona from The Last Halloween by Abby Howard, which is not out-dated at all, and which is, in fact, a good read.
Basically I was reading it while I drew this.

Let's call it a tribute and hope it's well received.

P.S. I got savagely ill a few days after PAX. Well, "savagely"  might be a bit of an exaggeration, but...
PAX Flu strikes again!