Keep me away from those Mint Slices.

Short story short, I like biscuits, and I have therefore made a small tribute to their awesome and terrible power.

In Australia we have the king of chocolate biscuits; the Tim-Tam.
These are the biscuits that make us the envy of the western world. One day in the far off future, wars will be waged and thousands will die fighting over the last packet of this wondrous food. This will truly spell the end of the world.

Personally I prefer a Mint Slice or ten.

You people-from-other-countries-who-don't-think-Vegemite-is-nice (about whom I am speaking hypothetically here I guess) don't know what you're talking about. That shit is great.

The common assumption that we in Australia have is that you're just using it wrong. Like you're slapping it on there like peanut butter.
Yuck. No. Don't do that. Just use a little smear. And put some butter on there.
Maybe on some toast.

If you're feeling super hard however, you can eat Vegemite like like I do; on a fucking crumpet.
Hell yeah. You'll have so much vitamin-b that your head'll explode.

You have to be tough if you want to have breakfast in Australia.
~King Longburns.

P.S. If you're from a country other than Australia and you're not familiar with any of the foods that I mentioned above, well then that's what Wikipedia is for.
If you are from Australia you can probably ignore the whole post. You already know that Tim-Tams are great, and you're probably eating a Vegemite sandwich right now.


...while wrestling a crocodile.

Where's Gumby when you need him?

I have finally hammered out another comic, this time with a Minecraft theme.
That and madness. 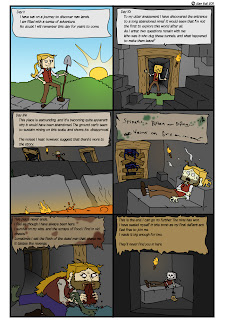 I like me a bit of Minecraft, but it's in a bit of a crazy state at the moment what with all the new additions being whipped up in preparation for it's full official release.

Potions and strongholds and swamps. Oh my!

Honestly I have no complaints. Not many of the new additions seem entirely finished, but they do offer a nice little taste of what will soon be possible.
Then, when things settle down again, I will rebuild my castle, make potions, and breed an army of sheep.
Something like that.

Strangely enough, this comic took longer to get out than I had planned mainly because I've been playing too much of a game called Terraria. It's basically like Minecraft but it's 2D and has more fireballs. Also flying eyeballs.
It's pretty much filling the Minecraft void while Minecraft is in a state of flux.
Maybe that's not so strange after all.

In other news I'm having my Royal Subjects erect a statue of me in the courtyard.
It's looking pretty good so far. I think they've really captured my likeness.
One of the peasants got crushed by a big piece of falling marble, but it was only one of the kids and we've got bus-loads of them.
Literally actually.