Have you tried turning it off and on again?

I work in IT support - only mild support mind you - and mostly it consists of helping people and fixing things.
I don't mind this at all. Hell, maybe I even like it.
Sometimes however, there are times when my life would be easier if the computer in front of me spontaneously caught fire and exploded.
A man can dream, can't he?

It would be much easier doing IT support in wild west times.
Hence the following comic. 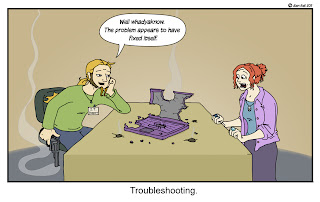 Honestly, it's only the computers that I have issue with. The people who bring them in are usually nice enough.
The computers on the other hand have an evil intelligence and are out to get you.

And me. Through you.

I apologise for the long hiatus.
I was unable to update for a bit due to unforeseen circumstances - such as the fact that I've been playing Batman - and I'm planning on taking the next week or so off as well.
I am doing this so that I can dedicate my time to trying to win a life sized statue of Batman off the telly.

It will require all my powers of comics, so wish me luck.

In other news, putting ball-bearings in the royal catapults was a good idea on paper, but didn't work so well in practice.
Seventeen people died.
Frankly, I think we can do better.

Tell the jester that the Royal Guard has standing orders to arrest him and throw him in the dungeon.
That joke was terrible.
~King Longburns.
Posted by King Longburns at 22:19:00