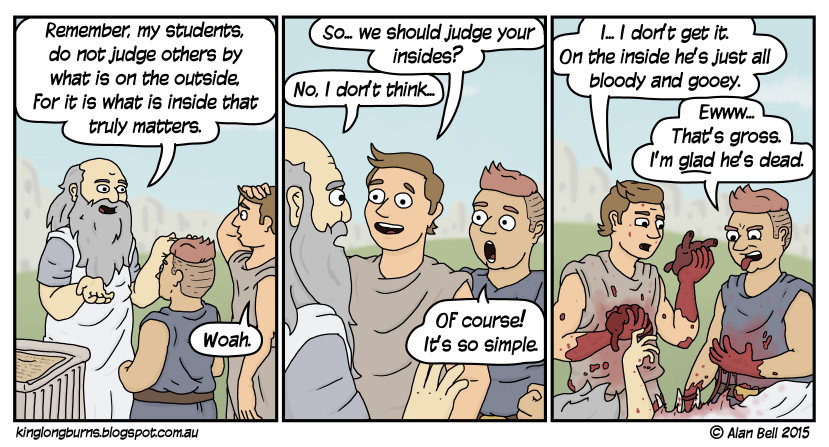 I studied philosophy at university and I had a lecturer who had a long, untrimmed beard and hair.
He looked a lot like the guy in today's comic.
It was exactly what I wanted when I signed up for philosophy classes.
The philosophy was secondary to the aesthetics of philosophy.

So, my entire life has basically been spent pretending that Back to the Future II was an accurate depiction of what the future would be like, and now I don't know how to feel.
We have passed their future date, and all we can do now is be annoyed that we don't have flying cars or hover-boards, and I can't wear a soundboard on my chest without people looking at me funny.

I've just decided that I will tell the children of the future that that's what the world was really like "Pre-Collapse".
If they ask me what the "Collapse" was, I'll just look sad, shed a single tear, and say "I'll tell you when you're old enough to understand" while staring out the window.
I'd make a great dad.

In other news, I've updated my store. You should go and check it out.
I have all my comics available as prints, as well as a seemingly random assortment of other products.
I may have gotten a little excited. As a result, you can buy a phone cover with an angry pharaoh on it.
Also on a notebook. And a pencil case. And a mug...
I stopped short of putting it on a skirt, but I did have the option.

This post is getting a bit long now, so I'll wrap up by saying that I'll be going to PAX Aus next week, so if you see me, feel free to say hi.
You can be the first to scare the living daylights out of me by recognizing me in public.
I'm told I do a fantastic double-take.